Loxus, which exports various dry bulk commodities, including pet coke, calcinated coke, corn and soybean, from the Brazilian port of Imbituba, concluded that using mobile harbour cranes to load consignments was inherently inefficient and wanted to explore alternatives. Given the type of commodities that it dealt with, a ship loader appeared to offer the upgrade needed.

However, the company wanted a highly flexible and, above all, mobile solution that could guarantee loading rates of at least 750m³ per hour. It was also vital that any equipment deployed would not cause damage to the quay, while Loxus was insistent that loading had to be as dust free as possible.

It therefore approached Telestack to see whether its requirements could be met at a price that would allow the company to make a reasonable return on its investment.

The problem with its existing mobile harbour cranes was that they were simply not fast enough, resulting in vessels spending too much time in port. Loxus therefore needed a system that could guarantee faster turnaround times,” explains Padraig McDermott, Telestack's technical sales manager.

Prior to putting forward possible solutions, extensive consultations took place. Mr McDermott twice flew out to Brazil to better understand the working environment at Imbituba. Loxus also sent its own team to the Telestack facility in Omagh, with the client reviewing details of the equipment at each stage of the design.

Given the fact that Loxus handles a wide variety of dry bulk materials, the Telestack solution also had to take into account product density, physical size and material conveying angles when coming up with the final design.

The eventual design proved to be a unique and innovative solution, encompassing both a mobile Truck Unloader (TU 1016R) and a mobile Ship Loader (TS 1242). 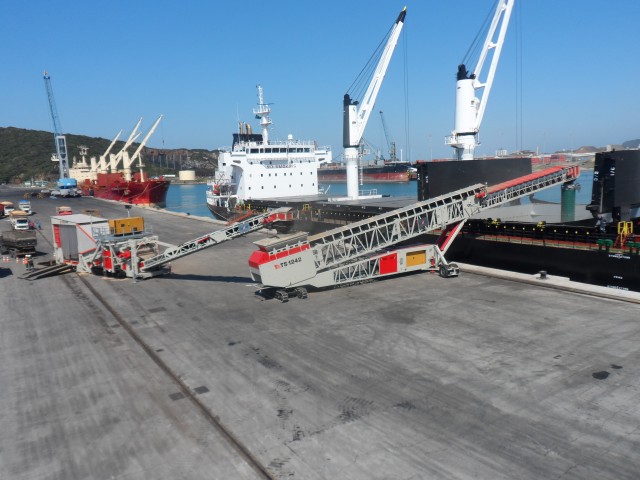 “The two components were not developed in isolation, but rather designed to work in tandem,” stresses Mr McDermott.

The Truck Unloader was unique in offering triple entry truck feeder points, effectively meaning that inbound trucks arriving at the port could be swiftly dealt with, thereby minimising costly queuing, which so blights many Brazilian ports during the harvest season.

“Having trucks sitting waiting for an unloading slot is both time consuming and costly. The Telestack solution at Imbituba virtually eliminates that by providing three discharge points, thereby ensuring a constant flow of materials into the machine, keeping any non-production time to an absolute minimum,” stresses Mr McDermott. 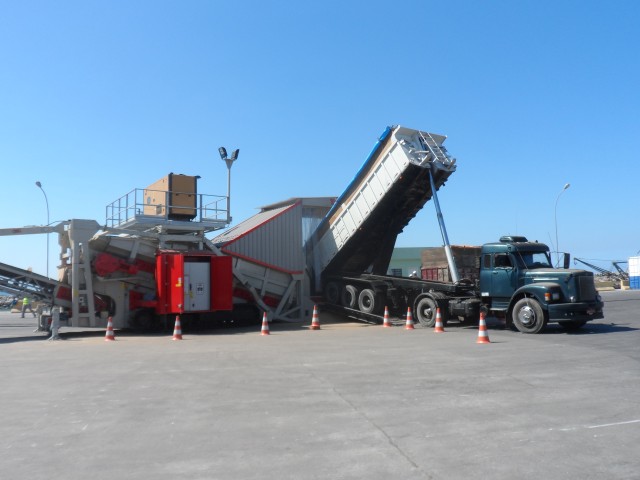 Of equal importance was the fact that Telestack's design was specifically tailored to ensure that the size and structure of trucks used by hauliers in Brazil to bring bulk materials into the port could be easily accommodated. 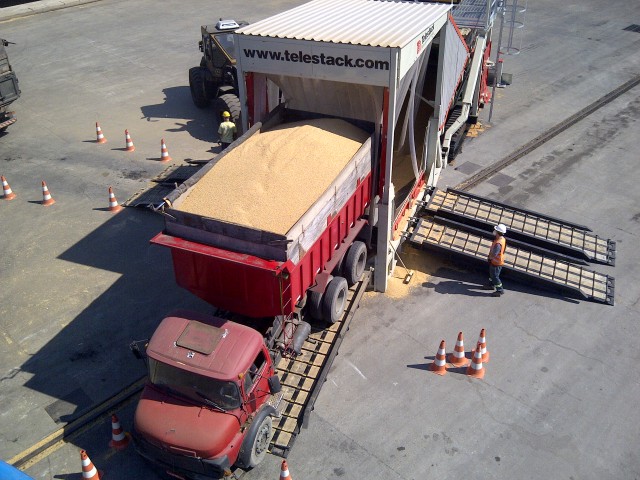 Loxus specifically wanted a “green” solution, requesting that any equipment be fully enclosed to encapsulate dust generated by the movement of inbound commodities. The tipping area for trucks is therefore housed and full dust containment measures built into the conveyors and transfer points.

In terms of technology, the Truck Unloader is electrically driven, being powered by a CAT Olympian GEP165-1 generator. It incorporates a Variable Speed Drive (VSD), allowing the customer to adjust the speed of the belt to match tonnage and throughput requirements.

“By building in this high degree of flexibility, the customer can load various commodities at different densities whilst maintaining the system at a constant volume,” says Mr McDermott.

Loxus was also insistent that the mobile solution should cause as little damage as possible to the quayside. After extensive research, the engineering team added rubber pads to the tracks, which provided extensive protection to the quayside paving.

As for the TS 1242 Ship Loader, it is also an autonomous unit, powered by its own generator and entirely self- contained. Part of the remit was to ensure that the unit does not emit dust and therefore has full dust containment measures in place on the inner and outer conveyor.

“After researching different chutes and methods of controlling and maximising dust containment, the engineering team designed and developed a freefall chute. This concept helps to guide the material to the vessel, while reducing the levels of dust escaping into the environment,” says Mr McDermott. 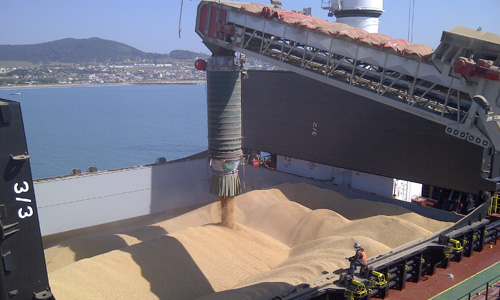 The tracks fitted to this unit were also manufactured using rubber, thereby minimising the levels of damage it could potentially cause to the areas where it is deployed.

Despite its size, the Ship Loader is fully mobile and requires just a single on board operator to oversee loading, using nothing more complicated than a hand held remote control. It can be moved from left to right, extended or extracted, and raised or lowered during the loading process to fully trim the vessels. The system easily moves from hatch to hatch.

“Another key point is that the machine doesn’t need to be stopped to make these adjustments, eliminating any costly downtime. The remote control also gives the operator the option of

speeding up or slowing down the system. Being interconnected electrically, the Truck Unloader and Ship Loader speed up and slow down simultaneously,” explains Mr McDermott.

Also significant is that the TU 1016R Truck Unloader can sit at an angle of 90 degrees to the ship loader minimising its quayside footprint.

Both the TU 1016R Truck Unloader and TS 1242 Ship Loader have been built using widely available parts and components sourced from global suppliers. The units were provided under a standard guarantee, with Telestack able to provide technical assistance both remotely and using a service partner located in Brazil. Furthermore, both units have been specifically designed with ease of maintenance in mind so as to avoid costly downtime.

The boys from Brazil

Nevertheless, because Telestack places great emphasis on pre-despatch training for its customers, two members of the Loxus crew that would operate and maintain the equipment spent two weeks with the company at its Omagh base, in Northern Ireland. They oversaw both the final stage of the build and all subsequent machine testing.

“They work-shadowed our experienced engineers to get fully acquainted with the equipment. We also organised classroom

training sessions with our electrical, hydraulic and mechanical teams. The idea was to get them fully up to speed with the equipment, so any later issues on site could be resolved without delays,” says Mr McDermott.

Loxus also invested significantly in spares and service parts, which were shipped with the machines. Any subsequent component failures can therefore be replaced from inventory. At Imbituba, this is very important since the the port is so remote that even getting one of Telestack's local partner engineers on site would take at least a day.

“If there were to be a problem with the equipment during vessel loading, it needs to be resolved rapidly to prevent rising costs, since vessels stuck in port incur expensive demurrage costs,” says Mr McDermott.

Should a major problem arise that cannot be fixed locally, he stresses that Telestack would be prepared to fly an engineer out from the UK.

Summing up, Mr McDermott notes, “This project has been one of the most diverse and challenging ones Telestack has carried out to date, and the success of the project highlights our commitment to developing and manufacturing tailor made systems to serve the needs of our customers.”

The mobile radial telescopic ship loaders ensure unrivaled flexibility when loading a vessel. The radial and telescopic features allow the operator to easily trim the hatch or multiple hatches from one feeding position reducing hatch change times and production downtime.